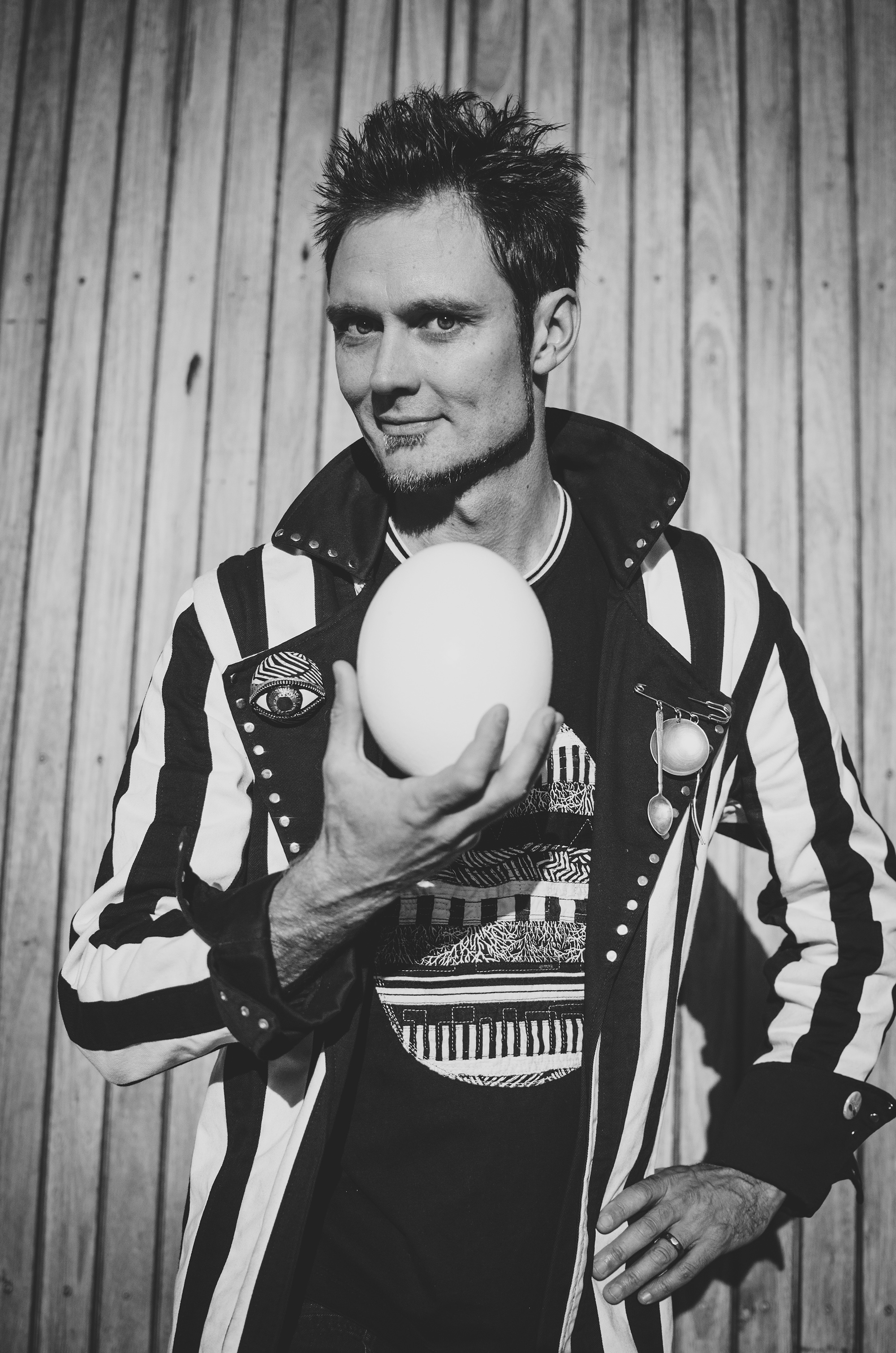 Spoonbill began, as is often the case with birds of play, in the bush. Back then, though, he hadn’t grown his plumage. Back then he was simply known as Jim Moynihan and he had no feathers to speak of. What he did have, however, was a natural ear for rhythm, sound and vibe, playing kit to audiences in pubs some time before the law recognized him as a legal punter. What started as a love of the drums progressively shifted to percussion, and finally settled into a love of electronic production. He may have had his first kit at 12, but in1998 he obtained his first sampler and a new direction in sonic creativity begun. After completing a degree in Industrial design, he began freelancing as a product and sound designer on a broad spectrum of commercial and art-based projects that saw him exhibit his conceptual ideas in museums around the world. He won a wide range of audio production awards including the First Place and People’s Choice Award, Electrovision 2004, and Best Sound Design, 2003 in the 15/15 International Film Festival. His sound installations toured both nationally and internationally, from ‘Imaging The Apple’ (New York 2010) to Melbourne’s renowned Hosier Lane (Nextwave 2006) and Federation Square (Sate of Design Festival 2004) to Tokyo Designers Block 2002, and 100 Percent Design (London, 2003). In 2004 funding was procured to create the Mobile Broadcasting Unit (MBU), a van equipped with live audio-visual performance gear, created to bust-out into spontaneous public installations in community areas, utilizing the urban environment as their concrete canvas (www.stembase.com.au/mbu). As well as the design work, over the years he was busily honing his sonic craft and laying birth to new tracks unannounced to the outside world. In 2005 he decided to let his sonic persona take flight in the form of Spoonbill, with the debut album: Megafauna. Spoony’s iconic mix of improvised electronica, sound art aesthetics and heavily edited live instrumental recordings became an instant underground hit, the scene taking to this new Aussie direction in electronica like the collective duck to water. As the demand for spoonytunes grew, Spoonbill minimized his attention on design and decided to focus on releasing and touring. After receiving 2 government grants for the creation of his follow up record, he got to work and, after 6 months, he produced his second, lushly aural LP Nestegg (released in early 2007). 2009 saw the release of his 3rd LP Zoomorphic. This was Moynihan’s most accomplished release to date exhibiting high-class production values married with infectious grooves. This album won several accolades including FBI Radio and Radio Nationals Album of the week. Around this time, Jim begun working as the head sound designer for Melbourne based interactive and game development studio; Current Circus. Over the past 5 years Jim has developed music based video games and interactive installation projects for corporate clients such as Intel, Microsoft, Asus, Ocean Park (Honk Kong), PrimeSense & Sony. All the while he has continued to produce critically acclaimed releases such as Airborne (2010), Astro Archipelago (2012), and more recently Boca Fiesta (2014). Since the Spoon conception, he has played countless live shows across the world at clubs and festivals in the USA, Canada, UK, France, Germany, Ireland, Croatia, Portugal, Russia, India, Israel, Japan, New Zealand and Australia. Moynihan is a restless sonic author constantly defying genres and experimenting with the potential of the vast sonic canvas. He has carved a unique niche within contemporary electronic music, building a worldwide reputation for his idiosyncratic sound design and richly textured high production values.