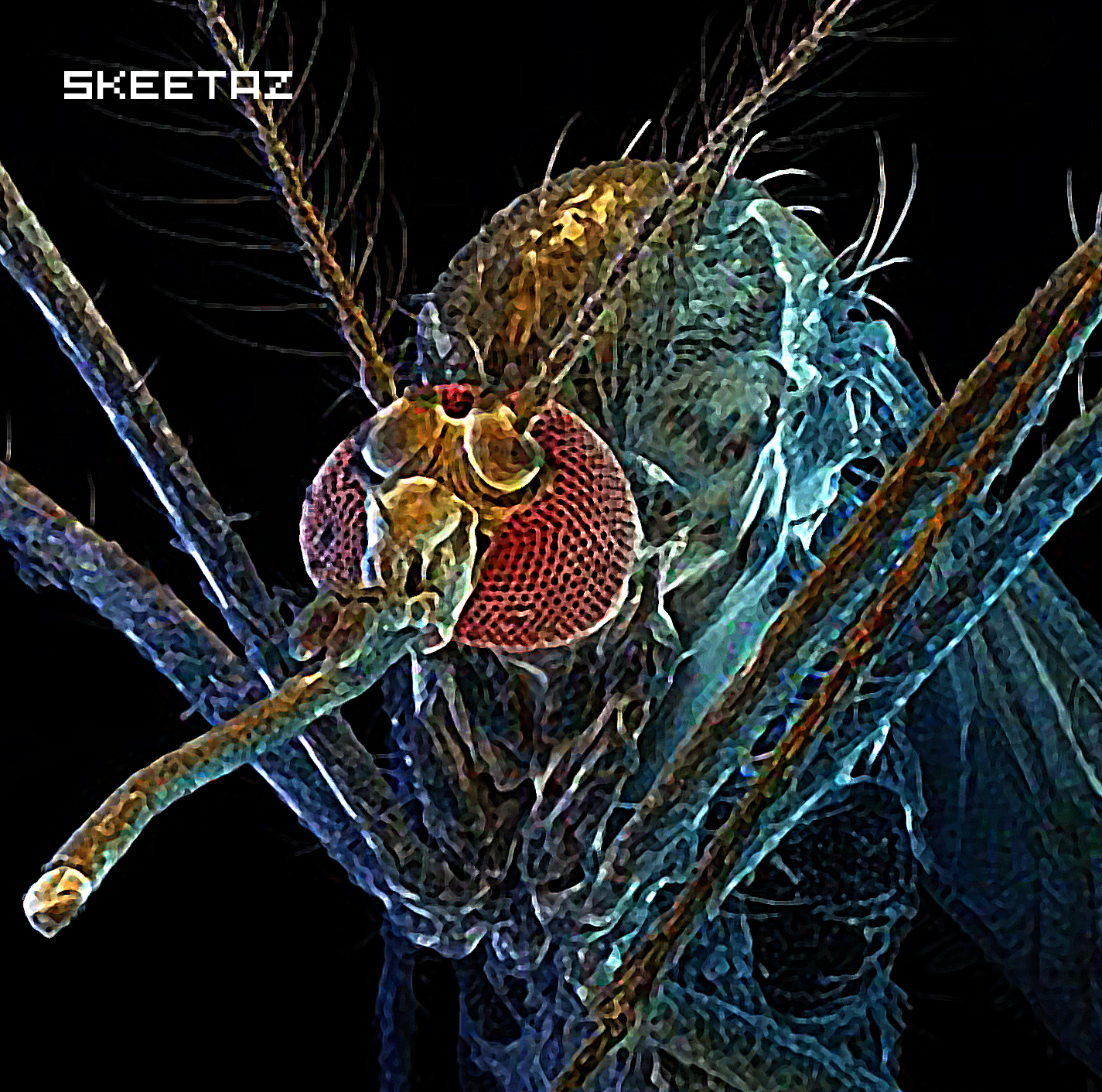 For the highest percentage to go to the artist, please consider purchasing this release from the Addictech.com store directly. -> www.addictech.com/p/8139

Bill Kinman and Jamie Watts have impressive resumes on their own. Knob-twiddler and keyboardist Jamie Watts (best known as KiloWatts) has dozens of releases in myriad styles to his name, running his own KiloWatts Music imprint since 2007 and having extensively collaborated with the likes of Peter Van Ewijk, Tanner Ross, and Amagine. Bill Kinman has walked his own path, almost constantly releasing under the names Son of the Electric Ghost, the Disciple Grin, and most recently, Bil Bless. He has run his own Bless Records for over a decade, and he’s been producing his weird Rephlex brand of braindance for longer than that. As impressive as their solo catalogs are, there is something very special and unique when they collaborate as the glitched up duo known as Skeetaz.

Donning the names Buzz Proboscis and Needles McFly, Skeetaz first buzzed into public consciousness with a couple of EPs in 2007 and a full-length in 2008. The work reflected a general IDM vibe, with a predilection for dark electro and psychedelic glitch breaks. While their names and sample selection clearly demonstrated their sense of humor, there was an undercurrent of intense, intricate production that made sure listeners knew they were indeed, serious about their craft.

This balance continues on the Sly Fatwah EP, but it is amplified. The title is punny and the samples are funny, but the sound takes no prisoners. “Nervous Wreck” is a stuttering sci-fi drum and bass track that sounds somewhere between Sileni and Venetian Snares. The use of water, cuckoo clock, and philosophical cartoon samples help keep it grounded, though Boomhauer be trippin’!

“Fly Swattah” is similarly hardcore, featuring techy production with growling bass, skittering percussion, and futuristic synth programming, and a mosquito swarm attack midway through. So much slapping and screaming!

“Boombadeh” closes the EP on an industrial glitch attack that wouldn’t be out of place on a DJ Hidden release, pushing up the BPM with a lurching beat while remaining thoroughly haunting, cresting with growls and barks melded into the texture. One yearns for a whole album like this, but the Sly Fatwah EP will be on repeat until then, and listeners will get something new out of it every time.

Instead of slowing down the tempo to mix into the current trends, Skeetaz pump up the BPM and smash the high speed glitch with a tongue in cheek take no prisoners assault !

Info Check for individuals Towards Shagle?

When shopping for a fit, searching by years, location, and sex

In which will you select a robust adult dating site along with 90 billion users coupled with unbelievable social network provides?